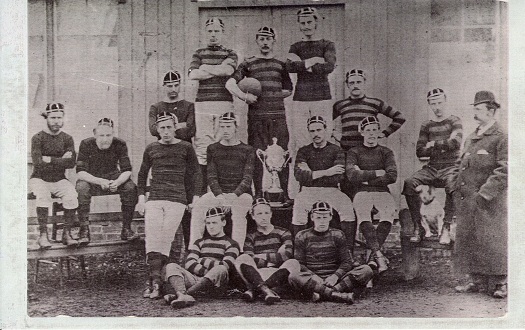 The first match of season 1877/8 was played on Oct 13th 1877 on the new ground against Glamorgan Rifles and Newport won by 3g, 2t to 0. Newport played 16 matches and won 15 with 1 drawn at Cardiff A 0-0. Newport incredibly only conceded 1 goal and this was in a South Wales Challenge Cup match by Carmarthen at Neath. The Cup did much to popularise the game in Wales and Newport were the first winners beating Pontypool, Llanelly, Carmarthen, Llandovery and Swansea. All matches, except the first were played on neutral grounds.

There were some interesting matches during the season, one being the match with Rockleaze on Nov 22nd 1877 played at Clifton Downs. In those days there was no dead ball line and the ball continued to roll, driven by the wind chased by Newport’s C B Cross. After apparently 300 yds he managed to touch the ball down for a try.  On Nov 29th 1877, Newport varied their formation to include 8 forwards and 7 backs – 2 backs, two half-backs and two quarters and used the same formation against Cardiff on Dec 1st. On Feb 7th 1878h against Birmingham they had 1 full back, 2 three-quarters, one half and two quarters with 9 forwards.

There were wins against Cardiff 10th Rifleman Yeoman, XX of Pontypool, Roath (2), Pontypool (2), Swansea (2), Monmouth GS, Rockleaze, Llanelly, Cardiff, Carmarthen, Birmingham and Llandovery. The only blip was a 0-0 draw with Cardiff at Sophia Gardens on Dec 1st 1877 There was also another possible match played with Newport beating Cardiff at Ely by 1g-0.

Will Phillips who had played since the start was elected captain and the great player of the period was Charlie Henry Newman who was cool, strong and plucky. Moggridge was an ex-Tonbridge School boy from a Monmouthshire family and probably the best three-quarter of the day. Tom Spittle was a clever and effective half.