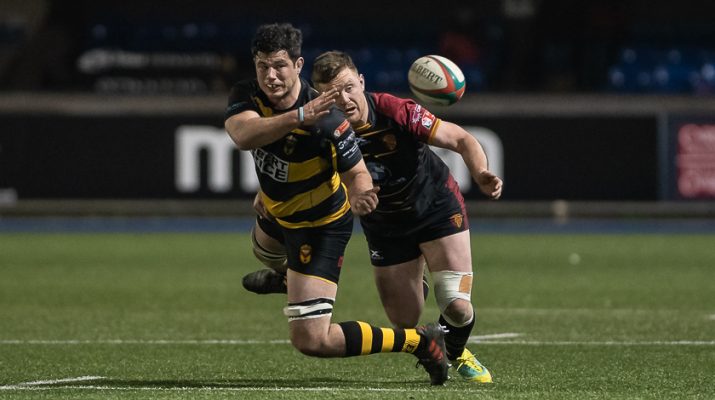 The Black & Ambers’ Cup campaign is over at the first round stage after a 35-17 loss to a much-superior RGC 1404 at the Cardiff Arms Park. The North Walians’ scored 4 tries in the first half hour, 5 overall, to effectively put the game to bed before the B&As really got going.

We all remember last season’s Cup campaign. There were some great memories and fantastic performances against Swansea, Aberavon, Bedwas and Llandovery to set up a Final against high-flying Merthyr at the Principality Stadium. It wasn’t meant to be that day and Newport were determined to go one step further this season. However, flashbacks of that Final drubbing came to haunt the players and the supporters again this evening as the ‘Gogs’ opened the game in a rampant fashion.

It took them just 3 minutes to get on the board after a Newport scrum was turned on its head and RGC scrum-half Efan Jones was given the green light to cross over. More dominant possession and territory for the away side came consequently and resulted in plenty of chances, with a second try coming soon after.

Winger Harri Evans went over after some piling pressure in the B&As’ 22, before scoring his second a few minutes later after an 80-metre long play, and gaps galore in the Newport defence. To make matters worse, Andy Evans was forced off after only 25 minutes with an injury, with Chay Smith brought on to add some flair and robustness in the back.

There were more missed tackles to come, which lead to a fourth try for RGC 1404 courtesy of centre Tom Hughes. Two Billy McBryde conversions and a penalty gave the ‘Gogs’ a 27-0 lead before the half-hour mark. Game over you could say.

Newport did finish the half the better side and had a few opportunities to open their tally for the evening. Haydn Palmer set up a chase against an RGC defender in which he ended just short and a ferocious Matthew Reed bolted his way into the helpless defenders, popped the ball up to Dan Partridge as he was forced to the ground and Adam Sabri, on his first appearance of the season, kicked foward to set up another chase, but the bounce of the ball proved unlucky.

However, the last score of the half did go Newport’s way; Geraint O’Driscoll notched his second try in consecutive games after a drive by the black and amber pack. But overall, it was a half to forget.

Craig Warlow and his backroom staff would have had a few choice words to say in that dressing room at the interval, which should have given his team a wake-up call and a boost going into the second half. But RGC still hadn’t finished their punishment.

It took them less than a minute after the restart to secure their fifth try of the evening. Iolo Evans got a piece of the action after his chip over the Newport defender landed into hands with all but a simple stroll over the try line left to complete.

The B&As looked like a well-beaten team and were struggling to regain any hope or confidence. Even an entire front row change and the introduction of Morgan Burgess in the first 10 minutes of the half couldn’t seem to add the spark they needed to turn this one around. However there was a glimmer of hope.

A good play for the “home” side with some tidy runs and passes culminated in Reed putting in Sabri who was caught just short, but did enough to feed the ball back to Reed who finished a great attack for the Black & Ambers.

A few more chances came for both sides, some agonisingly closer than others, but it was Newport who had the final say on the night when prop Dan Preece went over in the corner to secure a second-half victory for his side, but sadly far from a full-time victory.

Cardiff is not a very happy place for the B&As, having only won there once in the last 12 years. But their home form against the capital side is a different story, and they’ll be hoping to better that against the famous Blue and Blacks when both sides meet at Rodney Parade on Saturday (12th, KO 2.30pm) for the 429th time. We hope to see you there, supporting your city, your club!