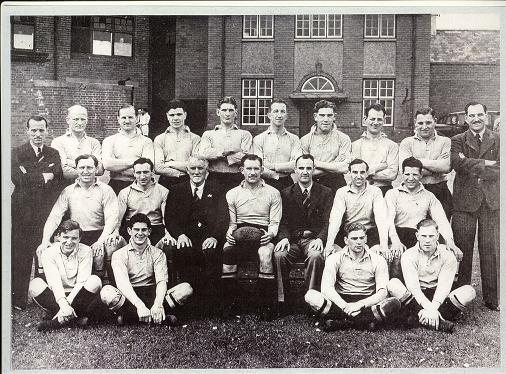 New captain Jack Bale’s job was made all the more difficult this season as Newport RFC lost several key players who decided to turn professional and go north to play rugby league. Wing WE (Billy) Williams joined Swinton RL in October 1946 for a then record fee, full-back D Ralph Morgan joined the same team in Jan 1947 and hooker Frank Osmond joined in Feb 1947. Newport also lost the services of full-back Tyssul Griffiths who joined Hunslet RL. If this wasn’t enough, key player and vice-captain Hedley Rowland only played 21 of the 41 matches due to illness but he still managed 10 tries at centre / wing.

Newport welcomed a number of new players among the 58 who played during the season. Most notable newcomers had to be wing Ken Jones and utility back Malcolm Thomas. These players were truly to become two of the all time greats of Newport, Wales and British Lions rugby. Ken Jones won his first cap during the season and played in all 4 matches – the first of an incredible consecutive 43 matches for a total of 44 caps broken only by Gareth Edwards some 20 years later. Ken was to score 17 tries for Wales. Ken had completed RAF service and studied at Loughborough College and although he had played for his home town Blaenavon and made an appearance for Pontypool, it was Newport’s great fortune that he decide to join them. Ken was also to become one of the UK’s great athletes – winning an Olympic Silver Medal in 1948 in the relay. Newport also welcomed scrum-half Haydn Thomas from Cross Keys and he would eventually form a great half-back partnership with Roy Burnett in the future. Another newcomer – to become a Newport stalwart and future captain was 2nd row LET Jones.

The mainstays of the pack were Jack Bale, Frank Osmond, Bill Jones, Ernie Coleman, Frank Morris, Peter Davies, George Parsons, Reg Blakemore and RT (Bob) Evans – the last three won caps for Wales during the season. George Parsons, a policeman, was at the time the youngest ever 2nd row to play for Wales (beaten by Gareth Llewellyn 42 yrs later in 1989) – he was 20yrs of age. He was taken off the train to Paris in March 1947 by the WRU for allegedly speaking to RL officials hence he only won one cap. He was effectively forced to turn professional which he did with St Helens after just 2 more appearances for Newport. He had only made 19 appearances for Newport since joining them in 1944 but he had played for Abertillery in between and played for Monmouthshire vs Kiwis in 1945 at Pontypool Park.

Newport only scored 351 pts during the season – quite a drop from previous season. A half-back problem didn’t help with Haydn Thomas ex-Cross Keys being injured and only playing 5 games. He was later to form a great partnership with Roy Burnett. Wynford Davies deputised and was eventually to be a Wales Trialist with Pontypridd in 1948. Another problem position was outside-half. Graham Jones played the first 4 matches, Jack Harris also played 4 matches while Alf Panting played 10 times in the position and several other players were tried during the season and interestingly Abertillery’s Ernie Lewis played 1 game there. He was to become an international referee and his son Steve and grandson Rob – both scrum-halves – were to play for Newport in future years. Full-back Gwili Jenkins, who had joined from Swansea the previous season and was to be the following season’s captain, was top scorer with 98 pts from 19p, 16c, 4t, centre Maurice Baker had a fair season but all too often the centres failed to make best use of the wings with the result that Ken Jones only scored 10 tries from his 23 games but his tackling was invaluable as he saved many matches. Interestingly Malcolm Thomas, who was to become a great centre played 16 times and Ken Spray played 18 times there. Hedley Rowland scored 10 tries from his 21 games -15 of which were at centre.