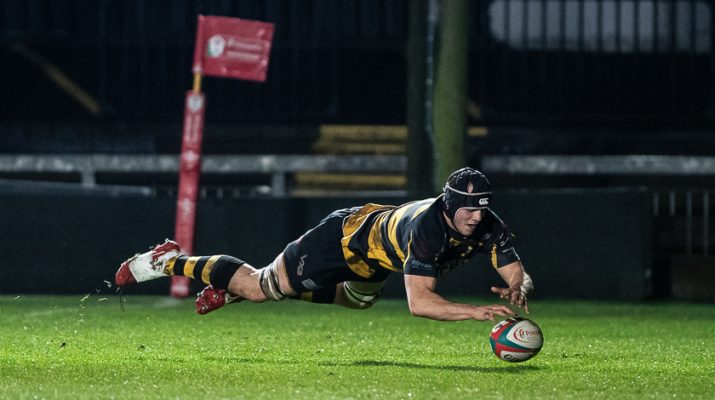 Friday night under the lights. It had been raining for most of the day. The pitch was just about playable. All of the signs were pointing to a low-scoring encounter between the Black & Ambers and the Welsh All Blacks, two of Wales’ famous clubs with rich histories dating back to the 1870s. But Craig Warlow’s men made sure that certainly wasn’t the case.

Newport romped to victory with an impressive 48-10 victory over Neath, scoring 8 tries in the process, something they haven’t done for almost 6 years. And it didn’t take long to get started.

The name Scott Williams is one which will bring back many memories for fans: a debut try against Uruguay back in 2001, a title-winning season in 2003/04 and over 200 appearances altogether in Black & Amber. And the powerhouse in the centre, along with Matthew Reed, crashed into the Neath defence early on within sight of their destination, before Henry Palmer finally got the ball over the line to open the scoring. Haydn Simons got his first of 8 points for the night.

Both teams were prone to some errors, and both had chances to take advantage. Harri Lang was the first to do so to extend the B&As’ lead when the visitors’ lost a lineout in their own 22 and and an Elliot Frewen run gave the young winger a touchdown in the corner.

Neath had some more decent opportunities to close the gap. Ex-Dragon Nicky Griffiths found a gap in the home defence and chased his own grubber before an unfortunate slip cost his side a certain try. Then the veteran scrum-half took a quick tap from a penalty, but didn’t reckon on an oncoming Chay Smith, who resiliently tackled him and turned the ball over.

Their rued missed chances came at a price when Tom Lucas scored one of the tries of the evening on the half hour mark. He found a space in the defence and played dodgems with the opposition backs before striving to the line for his second of the season.

More great chances came Neath’s way; Jon Morris’ ankle tap stopped a winger from racing towards a certain score, and Jarrad Rees was given the freedom of Rodney Parade to sprint 30 metres into the Newport 22 which would have led to a certain try had the centre looked to his side and found his teammate.

But the Blacks did get their reward in the final play of the half when a catch and drive gave Lee Evans a try and Callum Hall the extras.

Newport would’ve gone into the changing rooms at the interval a little uncomfortable with Neath still within relative distance of getting back into the game, and they cut the gap early in the second half when Hall’s boot took his side into double figures. But that was effectively the end of their evening, and the Black & Ambers ran rampant.

Morgan Burgess secured the bonus point after charging down an attempted Neath clearance and chasing the ball for only his first of this campaign. Then soon after, a Neath knock-on was picked up and given to Chay Smith who darted 70 metres and choose to go it alone.

It could have been much worse straight after when Seren y Gêm Scott Williams, 7 years after his previous appearance for the B&As, stole the ball and handed it to Jon Morris to sprint down the wing, before the touch judge cruelly awarded a penalty to the visitors.

Newport’s passing was lacking in the first half; the fans made their opinions heard when numerous passes to the wingers had too far forward or too far behind. But this was much improved in the second half. A neat phase eventually led to a Chris Williams score and Neath, had evidently thrown in the towel on what has been an extremely tough season for them both on and off the field.

There was enough time for Elliot Frewen to get in on the action to secure his 11th of the season as well as young Duan Thomas to end an overall impressive performance for the Black & Ambers, who have now won their last 3 consecutive matches and move up to 4th in the Principality Premiership table, although with at least one game in hand over the clubs around them.

The B&As’ next match is their final away visit of the season at Swansea on Thursday night (14th March, 7.30pm), before 5 home games, starting with the welcome of Ebbw Vale (Sat 30 March, 2.30pm) end an already superb campaign for everyone involved with the club. Long may it continue.