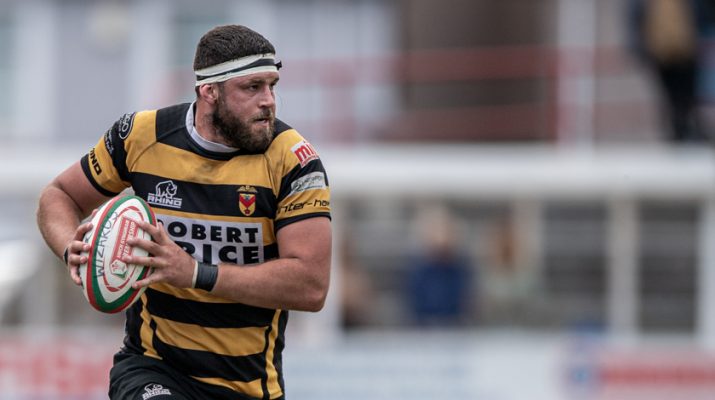 The weather conditions were beautiful, perfect for a game of running rugby as Newport RFC made their first visit to the Talbot Athletic Ground in nearly two years for this pre-season friendly. Obviously, things have changed slightly in the intervening period and the game is currently being played to a set a modified laws, a simplifier of which can be found here –

It would be interesting to see if the new coaches at the club, James Dixon and Sam Hobbs who have been brought in to spread the load from current coaches Ty Morris and Stuart Lawrence, would have had chance to show their influence yet, and which team coped better with their understanding of the laws as they currently stand.

The Match Officials for the fixture were referee Ian Davies and his assistants were Greg Morgan and Lee Gates. The game structure would be as normal, two halves of forty minutes each, but with “rolling” substitutions, so you may notice two names pop up in the same position playing for the same team, but that’s all a result of the comings and goings off-field.

Aberavon kicked off, playing towards the mountain. Andrew Mann received the ball, set up a ruck before Rhys Jenkins carried it forward. The teams soon found a balance, but it was Newport’s defence that started to dominate as the Wizards were rushed into some poor passes and equally poor decisions. Indeed, after twelve minutes, Newport had hardly seen the ball but were restricting the hosts to playing side-to-side within their own half. Sadly, a few injuries started to disrupt both teams as lack of matches quickly began to show. Big Joe Bartlett was assisted off with a hamstring injury while new recruit Oli Andrew, after a brave and spectacular mid-air catch, went off with, seemingly, a shoulder injury. Benji Hoppe also hobbled off with a leg injury later in the half.

Aberavon were first to score when wing Steff Andrews touched down. Centre, and former Black and Amber, Chay Smith made a smart take of the ball which opened up a chink in the defensive armour. Smith exploited the gap before passing to fellow centre Will Price who had Andrews to his left sprinting away, outstripping the Newport cover before crossing near the posts. The conversion was scored making it Aberavon 7 Newport 0 in 14 minutes.

Newport struck back immediately; Josh Skinner, carrying the ball in both hands, kept the defence guessing. They waited for the hit while Skinner deftly popped the ball right to new captain Matt O’Brien who had scrum half Rhys Downes sprinting hard to his left. A simple pass was all that was needed to send Downes in to score. Matt O’Brien added the conversion to make it Aberavon 7 Newport 7 on 16 minutes.

It was Aberavon who scored next. Flanker Benji Hoppe burst through a hole and passed to fullback George Gladding. Gladding’s pass out of contact was unfortunate and the intended recipient, Rhys Downes, could only spoon it forward as it looped towards him at head height. The Wizards seized the opportunity for some broken-field play and went for the left wing again. Chay Smith found space, drew the defence and put his fullback, Chris Banfield, on his way. Rhys Jenkins’ cornerflagging run was to no avail as the try was scored near the posts, making the score Aberavon 12 Newport 7 on 22 minutes.

Newport were still eager in defence, from 1 to 15. A series of driving mauls by the Wizards were held up following a close-in attacking lineout. The drives got heavier and closer to the Newport line but each were repelled until it was Matt O’Brien, of all people, who came up with the ball. However, Aberavon were proving impatient as, firstly, an Aberavon loose forward went off his feet at a ruck, like a missile, unchallenged and seemingly unseen by Mr Davies, and then ‘Avon flanker Lee Purnell was daft enough to impede Matt O’Brien within millimetres of him taking a free kick and do it right under Mr Davies’ nose.  Go and have ten minutes, son.

Newport took full advantage of the numbers; a spell of Newport pressure was finished off as Jonny Morris made something of a miracle pass, one-handed from knee height, up to Haydn Simons, who did equally well to feed Harry Griffiths on his right before the rangy winger could gallop across to score. Matt O’Brien was wide with the kick, so the score was Aberavon 12 Newport 12 on 36 minutes.

Newport seemed much more alive to the new laws than their hosts, Matt O’Brien putting in some quality efforts at 50-22 kicks until Aberavon failed to deal with one well enough at the end of the first half. The resultant lineout was good, the drive was strong, and it was hooker Will Griffiths who benefitted with a five-pointer. Matt O’Brien added the conversion to take us Aberavon 12 Newport 19 on 39 minutes.

Newport had another shot at extending the score before the end of the half. Aberavon were guilty of holding on to the ball in the tackle. Matt O’Brien set up the lineout and a series of drives took place, first Jamie Jeune, then Andrew Mann, but the defence was determined, the ball spilled loose an Aberavon were awarded a relieving penalty.

Worryingly, a Newport scrum folded early in the second half. Aberavon kicked the penalty to the corner and, from the lineout, Newport were industrious in defence but knocked on. The Wizards tapped quickly and put each other into space before outside half Aled Thomas sauntered across with barely a hand laid on him. He added his own conversion to level the scores at Aberavon 19 Newport 19 on 43 minutes.

The Wizards began to hit a vein of form; they were keeping the ball well and stretching the Black and Ambers defence. They eventually forced an overlap in the tightest of spaces as wing Frankie Jones pass eluded Harry Griffiths’ challenge while Chris Banfield, the home fullback, tip-toed his way along the try line to score. The conversion was added to make it Aberavon 26 Newport 19 on 51 minutes.

Newport retorted immediately as Geraint Watkin made a neat break and passed to his right to Josh Reid in support, who vaulted the lunging defender to score. Will Reed added the conversion to equalise at Aberavon 26 Newport 26 with 54 minutes on the clock.

The scrum gave cause for concern again with poor control at the base leaving Geraint Watkin having to deal with poor ball and Will Reed being given a hospital pass. The following scrum had Newport on roller skates, going backwards quickly. This needed sorting out. The Wizards could pick their passes, seemingly at leisure, as Newport wobbled, but the Black and Ambers were let off the hook as a kick put the ball dead. The game was opening up as players tired but there were signs of rustiness in both teams, which, this season of all seasons, goes without saying.

Aberavon were next to score through scrum half Rowan Jenkins. Centre Jordan Walters displayed some considerable talent during his appearance and neatly unlocked the Black and Amber defence with a deft touch which found Lloyd Evans run a terrific angle that split Newport wide open. The cover defence closed in but Evans simply passed right for Jenkins to cross. The conversion was added to take the score to Aberavon 33 Newport 26.

Newport found themselves a few metres out from the Aberavon line after an infringement by home flanker Smallman. Josh Skinner leapt at the tail of the line, drives from Tom Piper and Henry Palmer inched Newport closer. The ball whizzed out to Will Reed, back inside to Skinner who had Henry Palmer to his left again. Palmer was rewarded with a try which Will Reed converted to bring the scores to Aberavon 33 Newport 33 on 70 minutes.

It was beginning to feel like a game of ‘musical rugby’ – who would be in the lead when the music eventually stopped, such was the free-flowing nature of the game. It was looking more likely to be Newport, at this point. Henry Palmer, who was running with the ball like a man with a new-found love for the game, made a smart pass to Will Reed whose delicious pass wide had Aberavon in all sorts of trouble. Haydn Simons sprinted forward and passed left only to find Aberavon’s Ieuan Davies take the ball, having tracked back in defence. The Wizards kicked long and found Harry Griffiths in position to respond. Griffiths ran a diagonal, gaining ground before finding Andrew Mann out wide. He kept the move flowing and had Josh Skinner outside him again. Skinner pushed forward but with the cover closing in, opted to put in an angled Matt O’Brien-style soft kick towards the posts which Harry Griffiths, continuing his run, gathered and crossed for a terrific score. Will Reed added the simple conversion to make it Aberavon 33 Newport 40 on 73 minutes.

Aberavon went in search of a draw and were close to achieving that. A series of drives were squashed by the Newport pack, but infringements kept the pressure on as Mr Davies awarded a succession of penalties to the hosts. Outside half Thomas had faith in his pack as he kept giving them the platform, but they squandered each opportunity. At the fourth attempt, hooker Llew Taylor went for gold as he threw long and hopelessly high for his lineout jumpers, giving Newport the opportunity to snaffle possession and bang the ball into touch for a morale-boosting win on the road.

There were lots of positives to draw from this performance; the defence was, generally, pretty sound, there’s clearly a full understanding of the new law variations which Aberavon seemed to struggle with at times, the fitness was solid, which is fairly remarkable, to be honest and a lot of the new players showed up very well. Will Reed is a box of tricks, Will Griffiths at hooker looks like somebody not to be trifled with while George Young appeared to be a willing workhouse. Interestingly, for older Newport supporters, George is the son of former Black and Amber second row Robert, known to most as ‘Bosun’, who was present to view his boy play for one of his old clubs.

Newport RFC are back in action in their final pre-season friendly when they travel to Bridgend RFC next Saturday, 11th September.