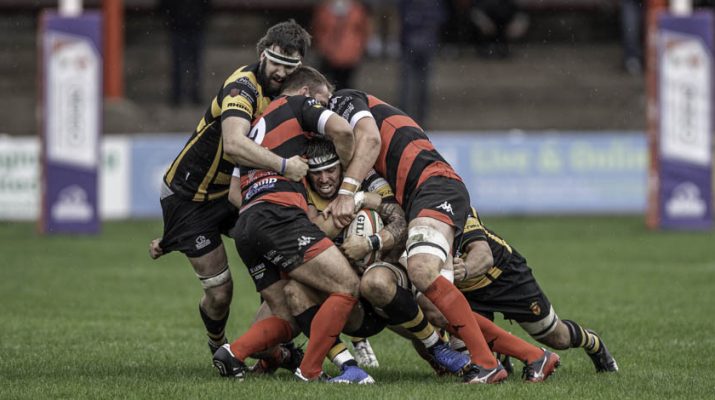 After an enforced break of a month, after just two competitive games, Newport returned to Indigo Group Premiership action by making the journey down the M4 to Port Talbot. Aberavon is always a tough place to visit and, looking at their activity over the summer, they appeared to have recruited strongly, not least acquiring Chay Smith from our ranks to strengthen their options at centre.

Thankfully, we didn’t have to cope with Typhoon Hagibis in South Wales, unlike the poor souls in Japan who lost their lives, but we did have plenty of wholesome wet Welsh rain. It had poured down for days, saturating the ground, and more was forecast for this afternoon.

Henry Palmer led Newport RFC onto the Talbot Athletic Ground pitch on the occasion of his one hundredth appearance in Black and Amber. Congratulations to him and we hope to see many more in the years to come.

Matt O’Brien got the game underway by kicking left to right in front of the stand, towards the motorway, if you will. Aberavon tried to return the ball, moving it out to Chay Smith, but he quickly became reacquainted with a black and amber jersey when centre Adam Jones clattered into him forcing a knock on. From the scrum, referee Mr Gareth John, felt he’d seen enough to award a penalty against Newport. Aberavon’s Aled Thomas booted his team up to the forty metre mark on the terrace side. The Wizards searched for an opening, working the ball well. A few thumping charges up the middle made some yardage until flanker Lloyd Evans, cutting an almost Tipuric-esque figure as he weaved a path carrying the ball in one hand, picked out lurking hooker Ieuan Davies who galloped along the touch line to cross for the opening try. Aled Thomas added the conversion to make the score Aberavon 7 Newport 0 on three minutes.

Newport retorted with an excellently worked set play which almost paid dividends as backs looped around backs, following their pass until Harri Lang bisected the backline at an angle and moved Newport up to the home 22-metre line. Newport set about the heavy charging themselves until Adam Jones spilled the ball while trying to make a pass out of contact. Another scrum penalty marched Newport backwards with a kick to their forty metre line again. Centre Joe Gage fashioned a gap and, with Chay Smith to his left and Newport cover around him, a simple pass would have seen Smith sprint in for an easy try. Luckily for Newport, Gage took contact and slowed the move down allowing the Black and Amber cavalry to realign.

Aberavon produced some spells of bewitching rugby. Wing Stef Andrews was allowed far too much room to run into midfield. He found flanker Lloyd Evans whose mesmeric running was coupled to an ambitious pass, over the head and out of the back of his hand, but backing up full back John Phillips wasn’t on the same page and fluffed his lines.

Newport were penalised at a scrum yet again on fifteen minutes. Garin Harris was spoken to by Mr John whilst Aled Thomas lined up a successful shot at goal making the score Aberavon 10 Newport 0.

The Black and Ambers responded immediately. Newport regained the restart kick as Dan Partridge hurtled forward. Adam Jones made further ground for the visitors before Luke Crane whipped the ball away from the base of the ruck. Matt O’Brien had Dai Richards to his left and it was him who jinked and whirled his way through the red and black cover, sitting full back Phillips down in the process, to score a cracking try for Newport. Matt O’Brien added the two-pointer making it Aberavon 10 Newport 7 with 17 minutes played.

Josh Skinner snaffled an Aberavon line out and managed to get the ball to captain Rhys Jenkins. He passed out wide to centre Harry Griffiths who, in turn, fed Harri Lang. Lang sprinted, Luke Crane in pursuit, but was snagged. Adam Jones took the ball forward but the Wizards managed to knock on in defence. A steady scrum was set and Luke Crane took the simple option of going to the blind side, popping the ball out to Harri Lang who cantered over in the corner for a simple score. The conversion was missed but the scoreboard now read Aberavon 10 Newport 12 with 21 minutes played.

The teams continued to knock seven bells out of each other, figuratively speaking, as the defences were pretty equal to each other. A crack came on 32 minutes when Mr John grew impatient with Garin Harris’ technique and flashed a yellow card at him. Aberavon, seeking to capitalise on a seven-man pack, kicked to the corner looking to roll the maul over the line, Neath-style. Chay Smith, among others, joined the pack to add additional force but the Wizards contrived to knock on and Newport could kick clear.

Dai Richards was given the ball in broken play and, as he side-stepped his way through the defence, Newport were frustrated by Mr John again as he spotted deliberate crossing. Aled Thomas opted for the kick, rather than go to the corner against a visiting pack light in numbers, but failed to add to his side’s score.

Matt O’Brien took a cheeky tap restart from the 22 and passed to the unlikely figure of Dan Partridge. Partridge put in a splendid run, vaulting tacklers and striding through the metres to beyond halfway. Luke Crane kicked forward for Rhys Jenkins to sprint forward and win the chase for the rolling ball. Sadly for Newport he was isolated and penalised for not releasing.

With the rain falling steadily, a steady Newport scrum was almost spoiled by a scruffy exit. Luke Crane did enough to secure possession for Newport, effectively sitting on the ball in doing so, but the Wizards defence were equal to Newport’s attacks. A hand held out by Aberavon’s Sam Williams would prove interesting as Mr John simply awarded Newport the scrum for a knock on. One might have been forgiven for expecting a penalty, if not a yellow card for the Wizard as the incident took place while Newport were attacking in the ‘red zone’, as it’s termed, but no. An interesting comparison would come later.

Deep into first half stoppage time and Aberavon kicked long. Dai Richards retrieved and ran the ball back into the hosts half. Mr John spotted an infringement against Newport. Matt O’Brien opted to take the shot at goal but, unfortunately, it dropped short. The Wizards looked to conjure something but the Black and Ambers locked them up into their own half as Mr John brought an end to a 49 minute half of rugby.

Newport made a few changes at halftime, Louis Jones for Garin Harris at prop and Kyle Tayler for Andrew Mann on the flank. Aled Thomas kicked off the second half. Adam Jones did well to gather the ball and barge Newport back up to halfway but a loose pass was secured by Aberavon. Yet another penalty against the visitors saw Aled Thomas line up a kick at goal but the effort was way off target and Newport clung on to their slender lead.

Moments later, as Aberavon launched another attack, Josh Skinner stuck out a hand and knocked on. Mr John had absolutely no hesitation in reaching for a yellow card. Now contrast that with Sam Williams’ knock on just fifteen minutes of play earlier in almost exactly the same position on the field and in similar circumstances. It’s easy to see why players, and supporters, become frustrated. All anybody seeks out of a referee is consistency. That was missing today. Aled Thomas opted to kick for goal and was successful making the score Aberavon 13 Newport 12 on 45 minutes.

The Wizards noticeably upped the tempo. Aled Thomas found options to his right and passed to wing Aled Rees who put boot to ball only for Dai Richards, with all the time in the world, to calmly call for the mark. As he restarted, the Wizards couldn’t resist tackling him both early and high and Matt O’Brien calmed things down by kicking Newport just into the hosts half. Dai Richards was superb at full back, absolutely unflappable and, usually, the rock upon which most Aberavon attacks would eventually fail.

The Wizards smoothly went through the gears and attacked again but Aled Rees spilled the ball as he tried to pass out of contact. The game was still on for Newport. Aberavon were recipients of a penalty rate of six or seven to one in favour and had played for twenty minutes against fourteen men yet were only a point to the good. If Newport could gain a foothold in the hosts half and avoid the attention of Mr John then this game was, potentially, there for the winning.

James Sheeky came on for Rhys Jenkins while Josh Skinner returned to the fray. Aberavon centre Chay Smith knocked on and, from the scrum, Matt O’Brien put in a long, low kick to the corner for the speedsters to pursue. Home fullback John Phillips gathered but could only return the kick to around 25 metres. Could this be that foothold? Furthermore, the Black and Ambers received a scrum penalty from Mr John! Newport battered and surged from the line out on the Aberavon 22 metre line but James Sheeky became isolated and Aberavon’s Lee Purnell made a good turnover.

Geraint O’Driscoll and Elliot Frewen came into the game on 67 minutes, replacing Adam Jones and Harri Lang. Immediately GO’D made his presence felt by putting in an intelligent kick which pinned Aberavon back into their own 22. Newport were enjoying their best spell of the second half but, unfortunately, Joe Bartlett couldn’t quite hang onto the ball as he looked to steal the Wizards throw in. Newport supporters found themselves looking at their watches ever more frequently as the minutes ticked away.

Following another scrum penalty against Newport on 73 minutes Aled Thomas pointed to the sticks again and made the kick at goal to bring the score to Aberavon 16 Newport 12. Newport were still in possession on a losing bonus point. Could they hold on to it?

With the minutes ticking on Aberavon looked to kick on and deny Newport anything. Wizard James Garland looped around to pass out to Garin Payne but Payne was ushered safely into touch and the danger passed momentarily. Aberavon launched a series of drives, edging closer and closer to another try. A scrum was penalised again and Newport supporters began having visions of a series of scrum penalties followed by a penalty try. The reset scrum was steady and the Newport defence hurled themselves into tackles and stifled the Wizards ambitions. An unlikely penalty then came for a high tackle against Newport. The heavy defending continued followed, predictably, by another penalty. Bafflingly, Aberavon opted to kick to touch rather than scrum, where they were clearly enjoying the benefit of the refereeing decisions. The ball was heard to make contact with skin and went into touch to end the game,

A losing bonus point was the bare minimum that they deserved from the game and, on a different day, may have come away from the Talbot Athletic Ground with all four points. It wasn’t to be, however, and the club now look forward to the next round of the Indigo Group Premiership when they visit St. Helens to play Swansea RFC on Saturday 19th October. The Friends of Newport Rugby are running a bus for supporters leaving from the Riverfront theatre at 1215 at a cost of £15 each. Come along and support your club!