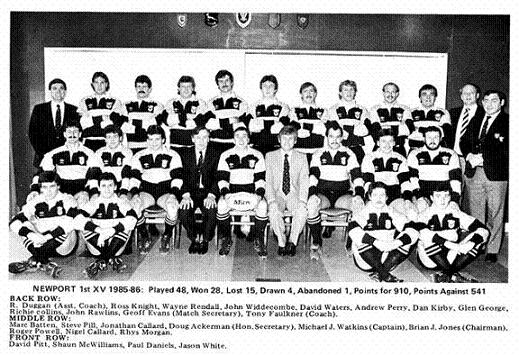 Mike Watkins led Newport for the 3rd time in 1985/6 and started by winning the Snelling 7’s for the first time since 1967. Wing Steve Pill, son of former Newport player Don was Man of the Tournament winner and received the Bill Everson Trophy. Pill was one of a number of new players this season with most notable being former Newbridge Captain and record points holder (405). He would have more than one spell at Newport and would eventually beat Norman Morgan’s all time points record. Other new players were wing /centre Brendan Walsh (St Peters, Cardiff), scrum-half Ceri Jonathan (Caerphilly), promising prop Frank Hillman, lock / back-row Phil Booth (Newport Saracens) and Hawkes Bay, NZ outside-half Dan Kirby.

The first 4 games were won in style and then Newport visited Bristol where the referee Inspector Crawford walked off the field complaining that it was like “street violence” on the field. A replacement referee was found but Newport lost 14-21. Fiji had a player sent off against Newport on Oct 30th in front of 7,500 people but Newport went down to a disappointing 7-6 defeat in spite of dominating possession. Keith James had a poor game with his negative play and Newport missed kickable goals. Coach Tony Faulkner promised that in future Newport would play a more expansive game and use thir three-quarters more. Newport had no fewer than 3 players sent off at Old Deer Park when they played London Welsh. Things improved after Christmas with the forwards in fine form and well supported by half-backs Paul Turner (who had missed 20 games from beginning October to end of January) and Nigel Callard. There was a succession of good results including a Welsh Cup Q/F win over Swansea at Rodney Parade. Newport then beat Aberavon in the S/F at Cardiff and met Cardiff in their third final to date at the National Stadium, Cardiff on April 26th 1986. A crowd of 38,000 saw Cardiff take a 22-6 lead helped by controversial refereeing decisions. Back came Newport with Paul Turner and flanker Richie Collins leading the way but Newport just failed and went down 28-21 in one of the best finals seen at Cardiff. Paul Turner was outstanding and many thought that he should have been given the MOM award. The season ended with Newport taking 4th place in the Merit Table and 5th place in the Welsh Unofficial Championship. Paul Turner was top scorer with 191pts from 25 games. Top try scorers were wing Shaun McWilliam (18) and scrum half Nigel Callard (15). Second row John Widdecombe made 41 appearances traveling from Torquay every week. He was followed by David Waters (40) and Rhys Morgan (37) who passed 400 games during the season. Glenn George received the Boucher Cup and Roger Powell the Webber Bowl.

David Waters finally played for Wales. He played vs England, Scotland, Ireland and France. He also played for the Barbarians. Richie Collins and Jason White played for Wales B on the Italy tour and fullback Jon Callard captained Wales U20.

Three matches were played in May 1986 on the tour to Spain under Tour managers Campbell Black and Geoff Evans. Newport rattled up 190 points with only 12 against. Paul Turner kicked 24 conversions in the 3 matches. 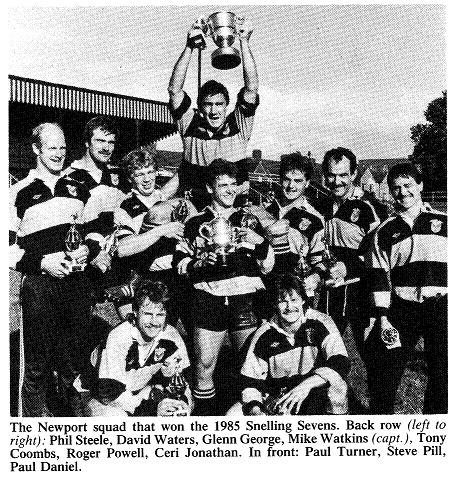